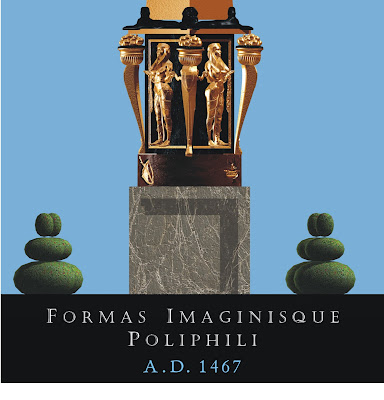 If you would like to know more about my design-study research project, Formas Imaginisque Poliphili, you can download information or have updates on the project's progress by logging on to: http://hult.academia.edu/EstebanAlejandroCruz

Posted by Esteban Alejandro Cruz at 09:20 No comments: 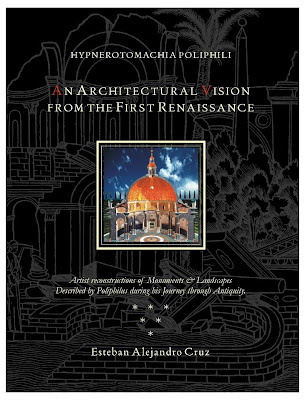 HYPNEROTOMACHIA POLIPHILI:
AN ARCHITECTURAL VISION FROM THE FIRST RENAISSANCE

After years of field research and development, this is a second book of what seems to become a series of publications, with the intent to reconstruct the architecture and landscapes described in the Hypnerotomachia Poliphili with the aid of digital mediums. This enigmatic incunabulum, with its 172 woodcuts, has fascinated historians, patrons, and especially architects ever since its anonymous publication in Venice in 1499 by Aldus Manutius.

A renewed interest for this legendary Renaissance text has emerged with modern translations readily now available in Italian, English, and Spanish, not to mention its use as the central theme for Caldwell and Thomason’s Bestseller, The Rule of Four, now to become a major motion picture. The Story begins with Poliphilus, who falls asleep and dreams that he is searching for his lost love, Polia. While under her beloved spell, he engages on an erotic pilgramage through Antiquity, discovering incredible architecture, gardens, and landscapes all envisioned and described in minute, technical, and artistic description. Part treatise, part narrative, this book introduces a vast array of architectural examples and landscape designs that were too visionary for its time. With more than 150 original artwork illustrations, this work is presented here as an attempt to share a new deciphering of this labyrinthine text after years of obscurity, bringing to life and giving significance to its fantastic architecture and allegorical visions. 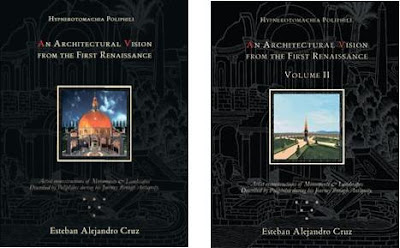 
PLEASE NOTE: IN ORDER TO HAVE A COMPLETE TEXT, READERS ARE SUGGESTED TO CONSIDER BOTH VOLUME I AND II.

Posted by Esteban Alejandro Cruz at 09:18 No comments: 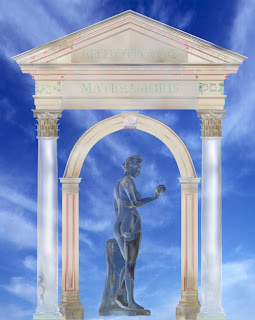 Five hundred years ago, an operatic tale of unrequited love and female erotica, launched a more available and sustaining passion in Renaissance architecture. What has remained inaccessible, however, is a complete understanding of the Hypnerotomachia Poliphili, the text and haunting woodcuts that fascinated European civilization upon its publication in Venice in 1499, inspiring artists, architects, and patrons ever since. The importance of the image has always been a fundamental aspect of iconographic, human communication, and it is the vivid imagery described by the dreamer in search of his lost love and the introduction of more than 160 beautifully, haunting illustrations that has made Hypnerotomachia Poliphili as fascinating today as it was in the late fifteenth century when the Press of Aldus Manutius first published this graphically exquisite book.

The story of Poliphilus, whose lust for the indifferent Polia is rivalled only by the carnal pleasures he encounters in the incredible architecture, gardens, and landscapes of his sleeping imaginations, has inspired centuries of architects to create similar sensuality in the real-life buildings and gardens they designed.

The cryptic messages, fantastic architecture, innovative graphic designs and layouts of the Hypnerotomachia Poliphili have moved and stirred western culture, prompting translators then and now to seek richer understanding of the author’s (or authors’) intent. In order to have a better understanding of what this visionary incunabulum contains, I am, with my project, proposing to use graphical and architectural forms of critical analysis instead of literary studies traditionally associated with scholarly work in the past. For this reason, I am proposing: Formas Imaginisque Poliphili, which means “imaginary models of Poliphilus” revealed.

By utilizing the technology of today with the history and traditions of the past, the project aims to develop a series of digital, artist reconstructions of the architecture and landscapes described in this enigmatic book of the early renaissance. Since I was dealing with building and environmental design, the passages were quite familiar to those of a basic design background: research, vignettes, scale-measurement-proportion, practical simulations, etc., while at the same time, employing experience and methods developed during my previous work with re-constructing historic Bologna. In addition to this, literary resources such as the works of Leon Battista Alberti, as well as the works of contemporary experts, were reconsidered to arrive at a critical and regional development of architectural vocabulary that were necessary for these artist reconstructions.
In the end, my artwork of Poliphilus’ architecture and insight into its significance within the Antiquarian context are presented here as an attempt to share an added deciphering of this labyrinthine text, bringing to life and giving significance to its fantastic architecture and allegorical visions.

This is a second publication of my work on the subject. It seems that I have opened a sort of “Pandora’s Box” with this project. Every time I re-read the Aldine text, I notice that there are always more details, decorations, archetypes, materials, et cetera, where all these elements have a significance waiting to be unlocked and shared after centuries of obscurity.

This book attempts to review almost all of the models that I have previously developed in my first publication back in 2006. At the same time, I am also introducing new monuments, which were begun, but never completed due to a time schedule. Even now with this book, there are still gardens, monuments, inscriptions, landscapes, and architecture that I have begun to reconstruct, however still remaining in the form of a sketch or draft.

Obviously, the natural direction for this project is moving towards a series of publications, covering the entire Hypnerotomachia, while hoping to maintain the spirit of the original: that is, creating an “encyclopaedia” of classical and universal knowledge through the visualisation of images. Macte animo!

With this in mind, I invite you now to witness the visions of a 500 year old dream of sublime beauty, ferocity, liberty, grace, and most important: Love.
Posted by Esteban Alejandro Cruz at 09:11 No comments: